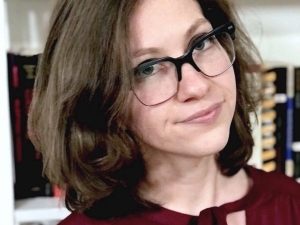 Nicole Eitzen Delgado studies and teaches modern literatures and cultures of the US and Mexico, with particular interest in the identity practices and discursive gestures of Latinx subjects, indigeneity, and US women of color feminism. In the summer of 2020, she will earn her Ph.D. in English and American Literature from New York University, where she also served as the inaugural graduate working group coordinator for The Latinx Project. Her dissertation examines the captivity narratives, broadly conceived, of two nineteenth century practices of Latinx captivity: that of Mexican-descent peoples under US Manifest Destiny, and that of Yaqui Indians under the Porfiriato in Mexico. Her borderland and archival research on the Latinx nineteenth century contributes to recent discussions on critical Latinx Indigeneities, and the transnational development of liberalism in the Americas. It also draws attention to indigenous philosophical conjecture, and recuperates early Latinx practices of kinship, cross-ethnic solidarity, and resistance.