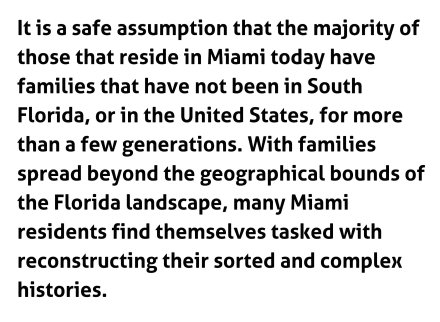 In a recent conversation with artist, Natalie M. Guillen, she spoke of her life as a child in South Florida's ever fluctuating cultural landscape.

Natalie was born and raised in Miami. Although her family shares a thrilling story of how they immigrated to the United States, their story is not uncommon. Like many whose family fled the early revolutionary regime of Fidel Castro, Natalie’s grandfather was jailed after speaking against his government. Her pregnant grandmother fled to the United States  while her grandfather fled to Jamaica planning to reunite with his family in South Florida. When one is forced to flee or evacuate out of their land, one is rarely granted the luxury of being able to preserve one’s history.

Natalie began photographing when she was around the age of 8 after finding one of her father’s old Kodak Instamatic cameras; the one where the flash bulbs were plastic only worked one time. Said Guillen: “I took that camera everywhere, and when my grandmother would pick me up from school, I would photograph people and things that caught my attention.”

Her interests in photography would eventually grant her entrance into Corcoran College of Art and Design, located in Washington D.C. Moving to the capital was a drastic geographical and climatic change for Natalie that came with an unexpected culture shock. She told of how she had never been reminded that she lived below the Mason- Dixon Line more than during her time in DC.  While in D.C, she was constantly told, “Because you’re in the South now.”  This all seemed so strange to her: “I was like ‘Hello, I’m from Miami.’ It’s about as southern as you could get!”

The notion that somehow Miami could be excluded from the South seemed out of place to her, “Miami is the South.” Florida being veiled by multiculturalism is often excluded from our concept of the South and by extension so is Miami. If you were to remove your pastel colored glasses and gaze beyond the palm trees, you would recognize Miami as the South. 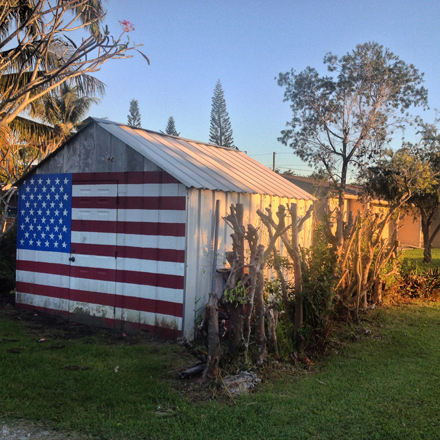 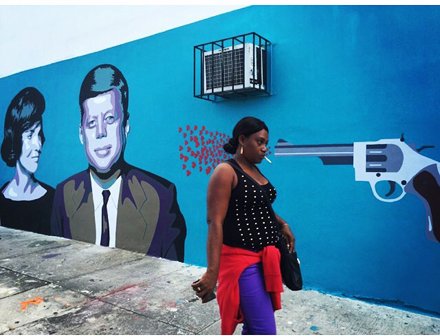 While in D.C., Natalie’s interest in southern photography would grow and develop. “There’s always something a little sad in those photographs.” She easily found parallels between notions of the South with the experiences of her youth. Her work often showcases unglamorous and marginalized communities who are soon to fall prey to a new Miami through gentrification. Natalie’s photographs take a cue from the tradition of Southern Gothic in terms of subject: dilapidated buildings, segregated neighborhoods, and the mystic or occult happenings of the botanicas. 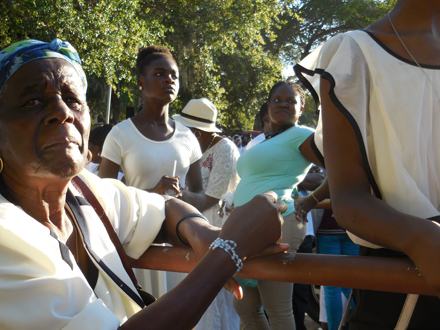 Her work is a southern reportage. Each image has a story whose future is uncertain. In an ongoing project she has focused on photographing some of the older historical neighborhoods of Miami: Little Havana, Overtown, and Little Haiti. While some of these neighborhoods are familiar, many were foreign to Natalie.  She often finds herself playing the role of voyeur. As a child, some of the neighborhoods that she now documents were forbidden to her because of the sociocultural connotations. An empathic viewer to these neighborhoods, she describes the experience of shooting in them:

I am a person who exists here in Miami because of my familial diaspora, an experience that I share with those that I photograph. This is the soul of Miami. These neighborhoods are some of the last places left that celebrate the real charm of what it once was. I feel like a lot of people avoid these areas of the city because of class,  xenophobic attitudes towards the people that live there, and what they potentially represent.

Miami is impermanent, as if in a perpetual search of its own unique self-identity. Natalie’s work makes this process palpable to the viewer. Through her photographs, she not only documents this change, but also offers a carefully woven history of South Florida. Her work questions what it means to be from the “American South” and be Hispanic. 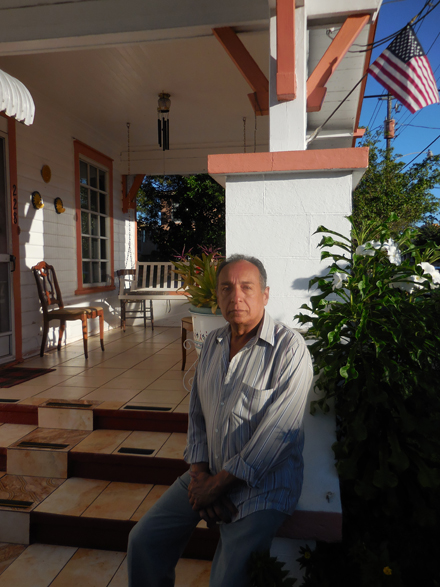 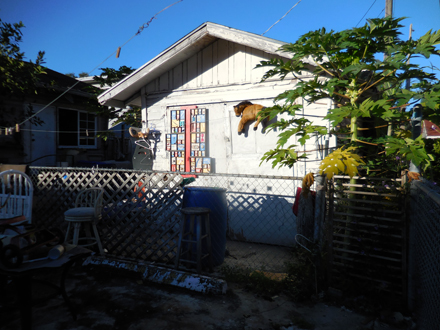 Natalie M. Guillen received a BFA from Corcoran College of Art and Design in Fine Art Photography 2009. Her work is currently on tour with Celebrate Diversity Miami. Natalie lives and works in Miami. 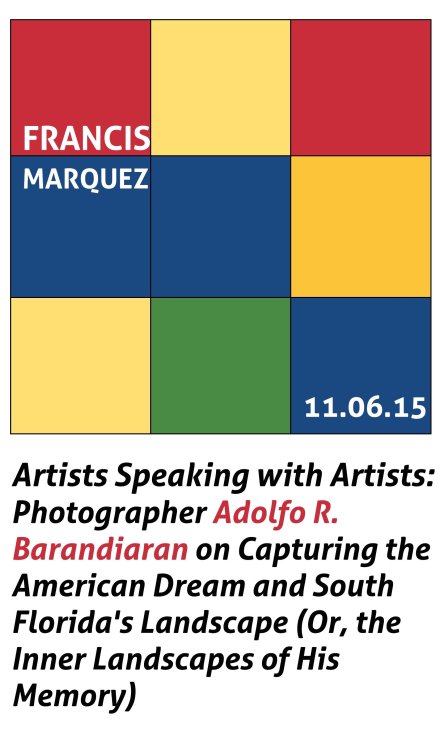 Miami’s role in the Latino diaspora is undeniable: for more than half a century it has been the “x” on the map, a goal for many looking to immigrate. In a constant state of flux, everyday Miami welcomes many who arrive with the intention of making this place home or of using Miami as a stepping stone on a longer pilgrimage of immigration. With its post firmly secured as a port of entry, continual migration has turned Miami into a sieve that covers the city in a cultural sfumato of sorts. Whether the first American born of immigrant parents or child immigrant, the experience can be equally disorienting and wonderful.

In a recent conversation with artist, Adolfo R. Barandiaran, he spoke of his life as a child immigrant and its relationship to his work.

It was January of 1981 and a six-year-old Adolfo was looking forward to the biggest adventure of any first grader’s imagination, summer! Yes, you read that right, summer in January. Adolfo lived in Peru where the school year had ended. He had been looking forward to a summer spent in his grandfather’s house with all his cousins and where grandma’s “Kekes” (cakes) were sure to be had. His parent’s had other plans, however, they had their eyes set on Miami. Adolfo’s uncle had served in the Korean War and for his service granted the possibility to “reclamar” those in his family. Adolfo and his parents were among those his uncle helped immigrate to the United States. With his summer plans ruined and now in the Northern Hemisphere, Adolfo found himself transported back into spring with still half a term before he would be awarded a summer break.

After making Miami home, Adolfo and his family would spend the next several years moving in and about the greater Miami area until 1984, when they would move to Kendall, an unincorporated community in Miami-Dade County. His parents had finally achieved what they considered to be “The American Dream,” they had bought a home. He recounted laughing, “My Mom said we were moving to ‘La boca del lobo’ because it was so dark.” The 2010 U.S. Census estimated Kendall’s population at just over 75,000 inhabitants, but in 1984 Kendall was not more than a budding community out in the boondocks surrounded by open fields and crops. He would continue to live in Kendall until his college days.

Adolfo’s interest in photography would emerge during his high school years. His father, who had dabbled in photography as a college student, was thrilled, gifting him with his camera. Sadly, the same could not be said about his mother, who was not thrilled to see a darkroom built in his room and quickly disbanded it. As a child Adolfo suffered from asthma attacks that prevented him from partaking in sports. He recalls being a boy at his grandfather’s home in Peru and watching his friend’s playing from the corner bay window that looked onto the street below: “it was like literally watching life through a lens.” The self-admitted loner would confess that something in the act of viewing life at a distance felt normal.

In 1996 Adolfo watched as the places of his youth fell under threat of rural expansion. This caused an impulse to document these places before they were erased from his life, like the landscapes of his early childhood left behind in Peru. “I wanted a physical past and photographs became the only means of having one.” As the tomato fields were replaced with new housing developments he found himself romanticizing these locations for their nostalgic and historic value. It would be with these early photographs of the landscapes of his youth that would jump-start his project Up and Away, which he continues to work on. 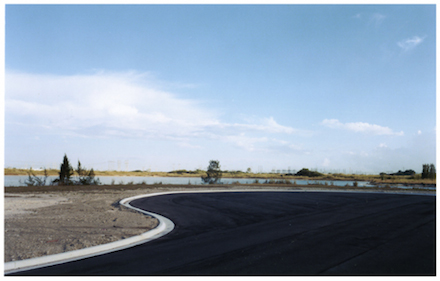 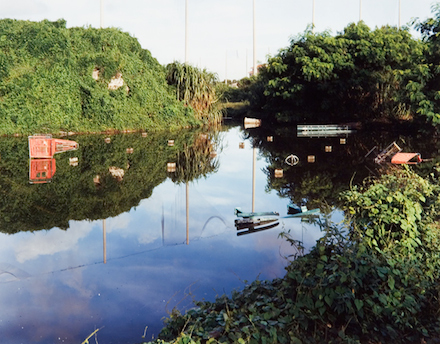 “The American Dream” would be a subject that his work would continue to address. Adolfo found himself photographing homes in mid-construction that now begin to fill the landscapes of his youth. He explained he saw them as adolescents landscapes: the land not quite developed but no longer virginal. These images of land in a betwixt state mirrored his own betwixt existence.

I saw the American dream as a mirage or a farce. That is, my parents had to work really hard, often two jobs, to maintain their American dream and often neglecting family life. There were appearances to be kept, objects to be obtained, and parties to be hosted.

These feelings would prove his worst fears to be true. During his last year in graduate school his parents decided that they were going to divorce. The strain of involved with maintaining “The American Dream” had proven too much for his family to overcome. In a separate series From Home, Adolfo explored the now fading images of his family life. Living in Boston at the time and finding himself homesick he began to photograph the long missed “icons” of his life in South Florida. He was photographing the inner landscapes of his memory. 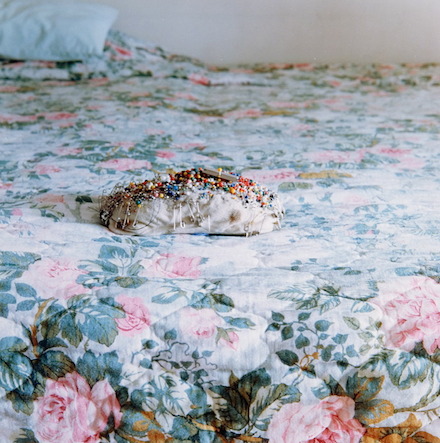 Adolfo continues work on his Up and Away series, showcasing the ever evolving landscape of South Florida.

Adolfo R. Barandiaran received a BFA from Florida International University in 1997 and an MFA from Massachusetts College of Art and Design in 2000. He also received an MLIS from the University of South Florida in 2011. Barandiaran lives and works in Miami. 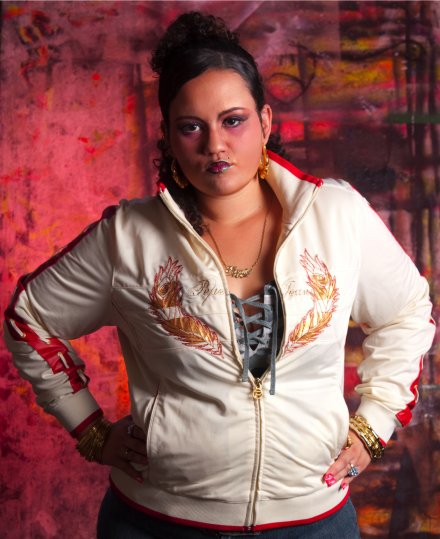 First, I would like to thank those involved with Arrob@ for the invitation to be November’s Virtual Resident blogger. I am honored and excited to do so.
There is something strange about coming of age in a place like Miami, Fla. It is often thought of as an international city: bustling with people, ideas, culture, and all sorts of foods. But Miami is only a short ride from swampy landscapes that more quickly bring to mind Deliverance than the palm tree ridden streets and pastel colors we are all familiar with. In Miami nothing is new, everything is a mutated hybrid, “Un arroz con mango.”

As a first generation American, I had no clue how to assimilate into American culture appropriately, while still embracing and being true to my Cuban heritage. I was born in the 80s to Scarface’s Miami. I became upset when I couldn’t watch Punky Brewster because my mom thought the news coverage of the Balsero Crisis was more important. I learned to dance in the kitchen with my grandmother listening to Celia Cruz and had feelings of confusion when the media began to attribute the creation of the twerking dance style to Miley Cyrus. Everyone in Miami knows it is really called Booty-Dancing, and it was invented in the 90s at Hotwheels, a local skating rink.

It was during my time pursuing my studies that these feelings and ideas would solidify themselves and become integral to my art practice. My work is rooted in the awkwardness and confusion of not having a reference point or set social model. My interest lies in the exploration and navigation of the space of being “in-between.” During my time here at Arrob@, I hope to further explore these areas of intersection.

Francis Marquez earned her BFA from Ringling College of Art + Design in 2008 and an MFA from the University of South Florida in 2011. She is currently a faculty member at Miami Dade College for the School of Arts and Philosophies, where she teaches foundation art courses. Marquez's photographs from the "Chonga Series" were featured in the 2010 exhibit Necessary Fictions at the Golden Belt in Durham, N.C.